A game I use with my students that needed a little ‘Dr Seuss-ing’.

- Put the cards on the music stand

- You need two or more players

- Remove the Middle C card.  It isn’t needed on the violin

- Each player takes a turn turning over a card

- Start from the lowest note. ie, if the first player turns over a ‘G’, they have to play the lowest G on the violin.  Second player turns over a card.  If they turn over an ‘F’, they have to the play an ‘F’ higher than the first note (ie would be second finger on the D string).  Keep turning over cards and going higher and higher on the violin.  The player who can go the highest wins!  Great for reviewing position work.

- Put the cards on the piano stand

- It’s your choice to keep one or two Middle C cards in – two if you want a really fast game.

- Choose your end of the piano.  Turn over cards alternating between players, and work your way into the centre of the piano.  First player to turn over a ‘Middle C’ card wins. 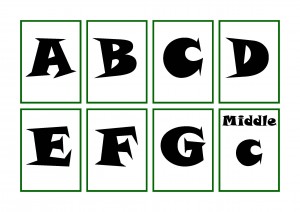