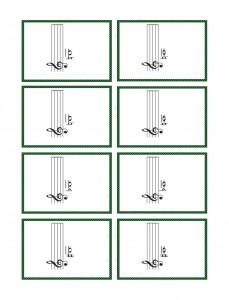 I had an awesome dream one night, that I was playing a game involving sharps, flats and naturals with some of my students.  And we were having fun!  The annoying thing is that I couldn’t remember the rules to the game.  Isn’t that always the way? ;D

The logic behind this game is that it is a great note revision game as well as teaching that a natural will cancel out a sharp or flat.

How to play the long version:-

I think this is similar to Old Maid?

How to play the shortened version:-

- Same rules to above except pull out one octave of cards only to use.

How to play En-harmonic Snap:-

You could use these cards as flash cards as well, and pull some out randomly and ask your student to play through them.

I did write these cards out for violin students, but I have used them with piano students to revise naturals, and they love the game too.  Those leger line notes above the staff are good for them to read ;D