I had the opportunity to attend the Sydney event of Time Out For Women yesterday.  There were over 2,000 women there, and it was AWESOME!

I did have a massive migraine the entire day, but I didn’t let that spoil the event for me.

The them was ‘Choose to Become’.  “All things are possible to him (she)  that believeth”, Discover Your Possibilities’.

“Choose to become a little closer to the woman you are meant to be”.  I really should have chosen to take more photos on the day but my head was hurting so much it was all I could to absorb what the speakers were saying.  And they were GOOD!

Here’s Hilary Weeks’ invitation to Time Our For Women 2011:http://www.youtube.com/watch?v=hvptW80EXQs 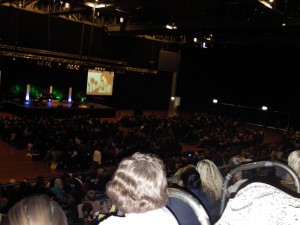 This gives you a little idea of just how many women were there.  You can see maybe half of them in this picture.  We were halfway up the rather high scaffolding of chairs (those stairs were never ending, I tell you!).  It stretched all the way over to the other side of the room (and you can’t see that in this picture either).

First up was Laurel Christensen who welcomed us and thought no-one was listening to her “How can you Australians talk and listen at the same time?  They can’t do both back home”.  We giggled at her naming of our States “Southern Australia?  Who is from there?  Whaaaat?  Oh, how do you say that?  Oops, sorry!  South Australia!  So do you guys have a Northern Australia?  Oh that’s the Northern Territory? Okay”.

She explained the rules of the day.  No videos (bummer!), don’t go into toilets labelled “Men” however most of the official Men’s toilets had been converted for the day but there were still some males around the place who needed a little privacy.  There was a mother’s lounge “but we want you to feel comfortable where you are however if your baby is fussing, the lounge has video and audio so you won’t miss out on anything”.

Then we got to meet Hilary Weeks.  Yay! 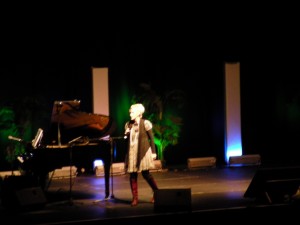 I can’t for the life of me remember what she sang. I’m sure it will come to me at some point, but I know I loved it (I think it was this one: http://www.youtube.com/watch?v=Bg8A8EaVG9E ).  Check out her red boots.  Aren’t they amazing!

Turn the other way, Hilary, so we can see those cool boots from a different angle:

Hilary introduced all the presenters of the day.  Up they came to the stage area and spoke to us for about 5 mins each.

They were (apart from Hilary Weeks):- 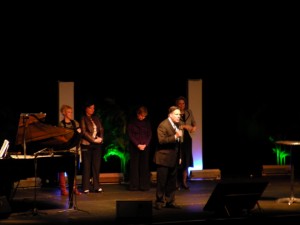 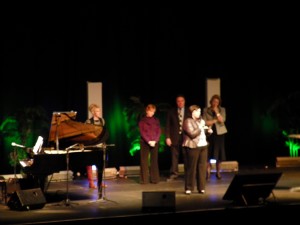 And here’s Laurel.  Sorry it’s a bit blurry Laurel, but you were SO far away! 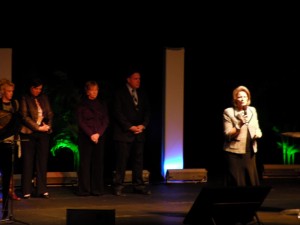 And Sheri Dew with Virginia Pearce (and others) in the background.  They look a little nervous, don’t they!  (There were a LOT of us!!! – and they weren’t expecting me to be photographing them right at that moment)

I was listening and absorbing but I managed to jot a couple of notes down.

Virginia said she does not keep a journal.  She will end up having a dreadful night before Judgement day, because she will be up all night trying to remember what she did in her life. Can we do her a favour, and write down her name in our journals with big capital letters so that when Judgement evening comes, she can just type her name in, and all these entries from every one else’s journals will come up!

Laurel said that she does keep a journal.  About five of them in fact.  She has a secret one that no-one is allowed to see – a ‘juicy’ one separate from the other ‘normal’ journals.

Sheri said “Women having righteous influence is a spiritual gift”…and a whole heap of other things but I was too busy listening to jot down more of what she said in those 5 mins.

She told us three things she learned:-

On the subject of prayer: “Your Father in Heaven wants to give you bread when you ask for bread”. She quoted D&C (9: 7-8) “Behold, you have not understood: you have supposed that I would give it unto you, when you took no thought save it was to ask me.  But, behold, I say unto you, that you must study it out in your mind; then you must ask me if it be right, and if it is right I will cause that your bosom shall burn within you: therefore, you shall feel that it is right”.

She asked if anyone had the quote hanging up in their home “Today is the first day of the rest of your life”.  She said she didn’t really like that one any more because where you are today is because of all the days prior to that.  “Today is one more day in a really important journey”.

She quoted Elder Holland in his conference talk in 1999 “Beware the temptation to retreat from a good thing.  Don’t give in”.

She finished with “Face your doubts.  Stay the course and see the beauty of life unfold before you”.  We got to have a break for 25 mins (a little longer than what was on the program, oops!) then we heard from Hilary again.

Here is Hilary with photos of her family on holidays with the washing machine (which is in the ocean).

Hilary Weeks asked us if we had pets, and if we named them.  (Yup!)  Do you name your car? (nope). How about your washing machine (Huh?).  She launched into her rendition of ‘Climb Every Mountain (of laundry).

“Climb every mountain. Wash every load. If you’re alive and breathing, then there are clothes to fold. Sort whites and colours. Wash some on hot. Oh my whites are pink now because of of one red sock“

She also said on the subject of children “I will know this child for all of eternity as an adult, but it is for only a short time that I will know each of them as a child. What a PRIVILEGE it is to know them as a child”.  They are only children for a short time.  She performed a brand new song which will be on her 7th album.  I think it is called “Time to Stand Still”.

Next was Virginia Pearce.

Now I’m not sure why, but I think I was too mesmorised by Virgina’s talk, that I didn’t take many notes down.  I did get a photo of her though! 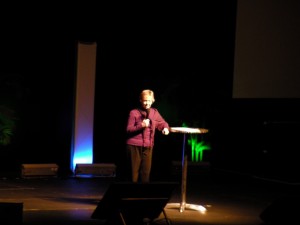 She did quote Sis Julie Beck “We are owed nothing, but we owe Him everything”.

Lunch Break Time!  We could smell lovely lunchy smells wafting through the auditorium and my tummy was beginning to rumble.  My little group had forgotten to get tickets to do the Possibility Packs but we had donated goods so we didn’t feel bad about that.  Something like 423 Possibility Packs were put together and handed over.  Hooray!  They were going to a Women’s Shelter to help women who have escaped from domestic abuse.

We headed to the sandwich and wrap stand (in the same place as the Deseret Book Store).  I was good to my credit card and decided not to purchase any books yesterday.  I am making sure I have enough for the Family Portraits we had taken a few weeks ago.  I can order some from Deseret Books after that

After lunch we got to hear from Hilary Weeks again, followed by Brad Wilcox.

I jotted down a few pearls of wisdom from Brad’s talk.

He mentioned a Temple Recommend interview he had with a lady.  He had asked her the questions, and they were all ‘correct’ (he told us the correct answers too, just in case anyone needed to know).  He got to the final question “Do you consider yourself worthy to enter the Temple” and she said a resounding “NO!”.  “But, you answered all the questions…”

She explained that she did not feel herself worthy to go on her own, “But with Jesus, WE’RE WORTHY!”

He said Satan whispers “If you are not perfect, you are failing”.

“We are not human doings, we are human beings”.  Perhaps one day the Primary Song “I am a Child of God” will be changed to “Teach me all that I must BE, to live with Him someday”.

On the subject of choosing righteousness and choosing to follow the Gospel and the impact that will have on our ‘judgement’ day, “No unchanged thing will want to live in Heaven.  The unrepentant sinner will be saying “get me out of here”.  The repentant will feel at home there”.

“Have you been changed by Grace?  Jesus doesn’t make up the different.  He makes ALL the difference”.

“The Saviour paid our WHOLE debt, not most of it.  How long do we want to stay in Heavenly Father’s presence?  What kind of body do we want?” (it depends on our righteousness, our attitude, our worthiness, our actions).

On the subject of Mormonism: “We’re not earning Heaven.  We’re ‘learning’ Heaven and practising along the way.

“How do we get to Heaven?  Hand in hand with the Lord.  Through His grace and His mercy and His sacrifice.  After all that WE can do”.

What a spiritual feast that was!

Quick 10 minute break (because we were naughty and took out time with the other breaks – oops.  They said they had called our husbands and imaginary hubbys for those who didn’t have one, and all those hubbys said we all had to be home on time, so TOFW wasn’t allowed to go over time. ;D

Sheri Dew was up next.  She was awesome too!

She told the story of a  young mother whose husband was a brand new Stake President.  They had an official function to attend with some dignitaries.  This mother found herself seated next to an older man who had completed many degrees at University.  At some point during the dinner he asked her “So what do you do?”  She explained that she was the mother of three children.  “Oh” he said, then turned to converse with the person next to him, ignoring her for the rest of the night.  To him, what she did didn’t seem very important. Sheri said “Next time tell him “I’m shepherding 3 children along the path of exaltation. How about you?” and see what he says about that.

“You are not good enough is a devilish LIE.  If we allow ourselves to be influenced by the world, that’s a problem.  Don’t give in to the illusion” (of the world).

“When we enter the Temple, we leave the world of make believe”.  “The gulf between the world and Heaven is getting wider.  Which side of the gulf are we going to be on?  The Lord’s side or the worlds?”

She quoted George Q Cannon “Heavenly Father reserved righteous women he could count on when things got ‘interesting’.”

She went through a whole heap of scriptures that mentioned them “living in a tent”.  Nephi dwelt in a tent, Ether didn’t even had a tent, he dwelt in a cave.  Moroni didn’t have anywhere at all to live – he was being hunted down by the Lamanites.  The point is that the Book of Mormon is for us.  They (those in the scriptures) weren’t living in ideal circumstances.  There are things swirling around us today that are not ideal circumstances.  We’re going to have challenges in this life.  Everyone has heartache and that is life.  Turn to the Lord and not away from Him”.

And then Hilary sang for us again:-

“He Hears Me” http://www.youtube.com/watch?v=aEJAT8MPm5A (don’t read the comments below this U-tube posting.  It’s not worth it – I ignored them too).

And then we had to get up and leave.  I think that was the hardest thing to do.