Curiosity got the better of me today and I did a search to see if our General Primary Presidency had sent out the 2012 Sharing Time Outline yet.  Turns out they are only sending out three copies per ward (uh thanks – I actually use mine every week to make sure the songs correlate with Opening Exercises…I treasure it…anyhoo…).

You can print out your own copy here:-

I had a play through the song we have been ‘allocated’ for next year: ‘As a Child of God’ by Janice Kapp Perry.  It wasn’t doing any special tingly things down my spine, so I think I have to warm to it. I did get some ideas flowing around my head though , so with the Outline already in my hot little hands, I will be able to sit down during the December/January school holidays and work some magic.

I’m excited about next year.  I know we haven’t even finished this year yet, but look how fast it is flying by!

I am heading off on holidays for two weeks, then we have one more presentation practice when I come back, then we’re on.

*Edited to add: That I was even more curious, so I checked out the online store at lds.org and discovered I can order my own coloured booklet of the 2012 Presentation.  You don’t even know how excited that makes me!  I am SO old fashioned!! (tee hee).  I promise you, mine will be used weekly, highlighted, read from cover to cover etc. *insert HUGE happy grin here* 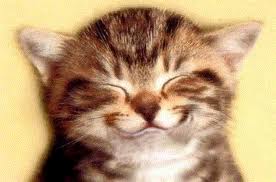 Oh deary me, I had a bit of a chuckle this morning.

I have been trying to co-ordinate my latest Scripture Hero event in Primary, and because we have a brand new Primary Presidency, there are a couple of teething troubles.  Minor ones.  No big deal really, except I am completely confused about our schedule now.

Just to be clear – I am totally finding the humour in this, it’s not like I’m complaining or anything, but can you just imagine the scenario?  There is an entire Presidency out there who has one view of what their schedule should be, and a Music Leader with a different view?  Imagine the mix ups LOL!  And the confused looks, and a baffled Scripture Hero who wouldn’t have had much time to change (I do NOT want a Captain Moroni coming out in his underwear!!) ;D

So I emailed our Presidency very nicely to check what their time schedule is, so I can plan accordingly.  And I am crossing my fingers that I didn’t just confuse them more ;D

I have to say that our last Primary Presidency worked together so very, very well.  Everything ran smoothly, there were no dramas, no troubles, always positive.  I am hoping things will stay that way.  I get nervous about change (don’t we all!).

So what is your Primary Schedule?  Do you begin with opening exercises?  Have Jnr Sharing time first?  I love being a sticky beak around the world *grins*.

Isn’t it interesting to know how Primary works all around the world?  I like to be a bit of a sticky beak, simply because I find it all so fascinating that basically it is all run the same way, just as it should be!

We are the first ward meeting in the chapel this year, so we are able to have opening exercises after our Sacrament Meeting in the chapel, and we finish half an hour prior to the next ward beginning their meeting.    The only problem I find with this is that most of the older children want to sit as far away as possible and not sing.  I usually have flip charts up to keep the younger children’s attention (those Sunbeams are adorable but they run amok when they’re bored!).  It means that if the older children can’t see the words, they don’t sing at all – and they tend to chat to each other.  So we make sure we tell them to move prior to our Opening Exercises are starting if they are sitting further away than we would like.

My son’s class are a crazy bunch of boys!!  They like to sit right under my nose in the very first row and chat to each other.  Or they absent mindedly pull the funniest facial expressions at me.  When you have five or six of them in a row doing that it is absolutely hilarious!  There are the same boys who hop/skip/jump gleefully into Singing Time and exclaim “Pygmy Chairs” when they see the sunbeam chairs up the front, and they sit down happily in them and then again they are right under my nose.  LOL!!  Needless to say they are quite often singing next to me standing up the front (which they seem to enjoy…Hmmmm!?!)

Anyways, I have been the Primary Pianist before, and the problem I had was trying to find the songs in time before our Music Leader would begin them.  I thought I would be really kind to our Primary Pianist and be super organised and do all the hard work for him.  He loves me, really he does!! (although he won’t admit that!)  I haven’t made him cry yet, but I have made him dress up as a super hero (which his wife thought was HILARIOUS!). 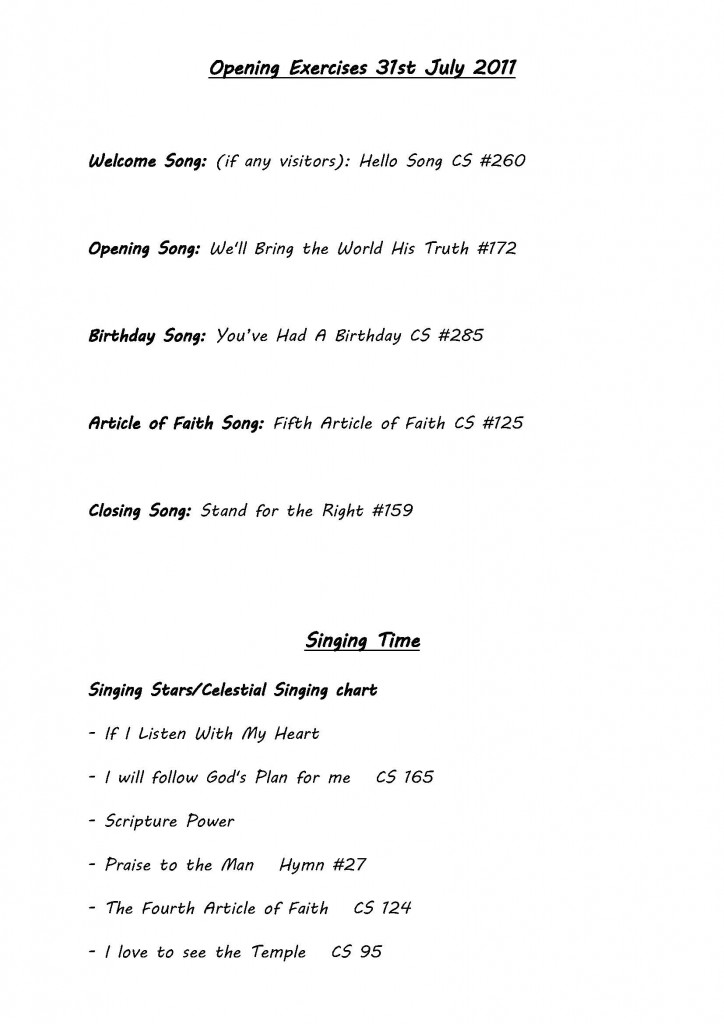 I print my schedule out 3 times – one copy for me, one for our Pianist, and one for the Presidency member doing Opening Exercises.  This schedule has what we’re doing tomorrow.  There is no mucking around searching for song numbers, our Pianist can play (practise??) some of the songs as prelude music and our Presidency just LOVE it.  It also means I know exactly what materials I need for both Opening Exercises AND Singing Time.

I have asked our Pianist if he would like the songs early in the week to practise as I have a monthly schedule I do and would be more than happy to email that, but he said he wouldn’t look at them anyway, but 5 mins before Opening exercises means he gets to skim through and see if he remembers the tune.  If he doesn’t, I get to sing “Alllll byyyyy myyyyyyseeeeeeeeelf (don’t want to be…)” ;D  Which isn’t so bad – I can sing and I can sight sing anyway (bonus!  – Did I mention I am a music teacher?  It kind of is my day job).

So what do you do organisation-wise?   Do you also involve your Primary Pianist as much as possible?  Get the children to do fairy claps when they have played beautifully?  I also make sure he gets a said thank you at the end of each Singing Time so he knows that he is appreciated.