A Simple Mother’s Day Song: “Dearest Mother, I Love You” for violin, piano and child’s voice

I volunteered my little family to do an item for Mother’s Day this coming Sunday.  (What was I thinking?)  I whipped up a simple arrangement of ‘Dearest Mother, I Love You’ found in the Children’s Songbook.  It’s simple, but you don’t want a complicated accompaniment or descant or you’ll have a very confused child singing.

Here’s my arrangement: Dearest Mother I Love You

The violin part is also suitable for a flute.

Articles of Faith Posters for Primary, FIG, Home or Anything Churchy

I was looking up some Articles of Faith posters (because there are lots of clever people out there) for a Primary activity I have coming up.  I’m doing an Article of Faith/Easter Egg Hunt and thought that having the children recite the Articles of Faith as part of their clues would be great.

I stumbled across a site by Heather called ‘Simply Fresh Designs’, and she has some fantastic looking Article of Faith Posters for free in different sizes.  She only asks that they not be re-sold as she isn’t making any money off these, and doesn’t think other people should either.

Here’s the link to her site and her fabulous posters: http://www.simplyfreshdesigns.com/2010/10/lds-prints-articles-of-faith/ 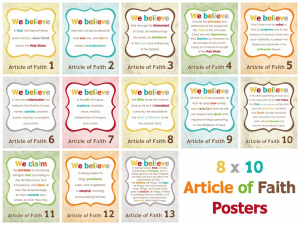 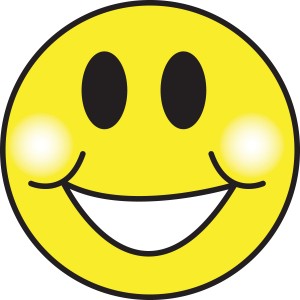 Our music leader is holding up ‘Stop’ and ‘Go’ signs in the chorus of As a Child of God.  The teachers had just been handed their own copy of the song and were looking down at the words rather than look at the music leader.

The children were all paying attention, the Stop sign was held up and one teacher sang through the ‘stop’, completely oblivious until the little person next to the teacher gently tapped them on the arm and piped up “Excuse me *insert name*, you sang through when you were supposed to stop”.

The teacher glanced up, had a quiet chuckle and exclaimed “Oh, I must have the wrong glasses on today.  Silly me!”.

Tee hee hee- a perfect example of how to deal with situations tactfully.

Noah was Blessed for Choosing the Right This is what Phil is doing tomorrow in Singing Time:-

Concentration/Memory is really easy.  He thought this was a safe activity to do after teaching the children ‘Choose the Right’ for 10 mins.

The crazy thing is that he is useless with laminating, so I get that job.  Lucky me!  We cut around the animals and lightly pasted them onto*paper, then laminated them.

The *paper was yellow A5 sheets cut in half so that the children can’t see through and cheat. 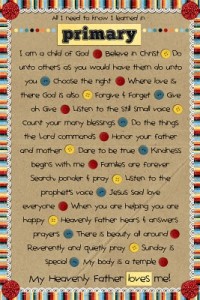 Happy New Year with a Truth or Consequences Game

I spent about 10 mins teaching the Primary children our 2012 song.  I had them learn the chorus.  Then I sang the verses, and they joined in each Chorus.  The children didn’t find it an overly exciting song, but I’m sure it will grow on them.

Our poor Primary children are coming off their sugar high from Christmas, so I gathered they were going to be a somewhat rowdy bunch today.  Yup, I was right.  Good thing I had organised to do a Truth or Consequences game that I found here: http://basicprimarymusic.blogspot.com/2010/10/truth-or-consequences.html

I adapted the game a little in this way:-

We had an absolute blast playing this game.

It is a game that could be played any week this month as it goes fairly well with the theme. 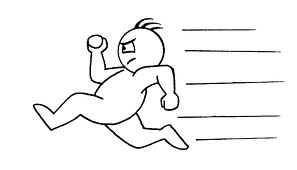 One of our brilliant CTR teachers was saying that she taught her 5 year olds a lesson on Fasting.  She dedicated the entire lesson to the principle of fasting, along with some hands on activities on the subject.  The next Sunday she reviewed what they had learned the week before.  “Can anyone tell me what Fasting is?”  None of the children answered.  She asked again “Anybody?  Does anyone know what fasting is?”

One child piped up “It’s when you run really, really fast!”.

(Hehehe all that effort put into the lesson, and she got that response.  LOL!)

I found a site called Kadenscorner.comthat has some fantastic printables.  You can sign up for free to access 3 downloads (a month, I think), and if you require more, you can pay for a subscription.

I came across these cute gift tags: http://kadenscorner.com/634/printable-snowy-christmas-tags-mini-cards/ and thought a lovely idea for Singing Time would be to prepare a ‘present’ (a box wrapped up nicely), possibly with a scripture inside to read out at the end.  On the outside you could attach a whole heap of the gift tag cards, each with a song to sing.  Plough your way through the songs to get to the present inside.

Great if you want to hand out mini candy canes or lollipops to the children as well, but I like the idea of just having a scripture to read about the Saviour inside.  He is, after all, our greatest gift! My adorable Primary Children sang in Sacrament Meeting today.  We had a bit of a hiccup – our Primary pianist didn’t get up to play, and I couldn’t see him sitting waaaaaay up the back (what a cheeky man he is! ;D) so I had to ask my husband to hold up the words so that I could play.  We have a great bunch of children who all got up, stood together and didn’t even giggle when one of them got a fit of sneezes right in the middle.

I’m so proud of them!

For Junior Singing Time, I got a large laminated Christmas Tree and labelled laminated ornaments from 1-13 (weird number, I know!).  I gave our Primary Pianist a list of the numbers with songs to go on the back. Here’s what they were:-

I got the tree and ornaments out of a book I purchased titled ‘Super Singing Activities’. 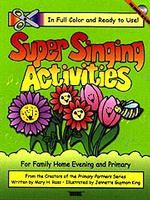 You could print out your own tree and ornaments, or use a miniature ‘real’ tree with decorations.

Alison over at her Oopsy Daisy Blog has come up with some fantastic looking ‘Christmas Action Cards’.  You can use them with your little ones at home, or for Nursery, or for Singing Time in Primary.

I will use them in between our ‘serious’ songs that we are learning for upcoming events.  I can show a card or two during an action song – something like ‘Book of Mormon Stories’ or Popcorn Popping…you know the ones.  I can even use them for more upbeat Christmas songs like ‘Christmas Bells are Ringing’.

The link to Alison’s site is here: http://www.oopseydaisyblog.com/2010/12/book-advent-day-20-christmas-action.html  They’re about halfway down her post with a download link to them.

Thanks so much Alison! 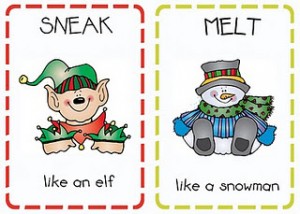