Needing something to do with the Jnr Primary children after the Primary Presentation, I decided to keep it simple with a 2017 version of Pass the Musical Parcel.

I came up with 8 cards (stick one on the outside layer as well, so they can sing that one as they pass the parcel around).  I did put in a cheap Kmart toy in each layer, and had a container full of toys for the children to take one each as they left to go to their classes.

Make up your own, adding in your own songs, or add in a different action that they need to do while they pass that parcel around.  Our Jnrs absolutely loved the game, and the only issue they had was getting the circle they were sitting in WAAAAY too small.  They were practically sitting on each others’ laps, so I had to keep wiggling them back.

But it was hilarious, and the children were so good.

Here are my 8 cards (yes, they’re different sizes, they’re only going to get torn off and thrown in the bin anyway): Pass the Musical Parcel 2017 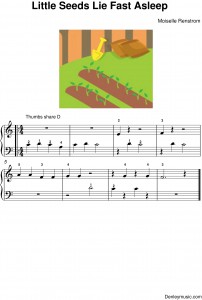 I have student of mine playing prelude songs before we have Opening Exercises.  The idea is that she gets to practice, the children are able to sing some action songs after having sat through Sacrament Meeting, and it allows the Primary Presidency to get ready.

I simplified Little Seeds Lie Fast Asleep for her.  It’s probably TOO easy for her, but it’s a good one to spring on her when she’s sight reading.

Flip chart for When I Go To Church Here’s my flip chart for ‘When I Go To Church’.

I have used pictures from the church website, also found in the Children’s Primary Songbook.

pdf for flip chart here: When I Go To Church Flipchart

When I Do What’s Right I Feel Good Flip chart

I found a catchy song on the LDS Church website called ‘When I Do What’s Right I Feel Good’ by Margie Lindsay found here: https://www.lds.org/music/library/search?query=When+I+Do+What%27s+Right+I+Feel+Good&lang=eng&x=0&y=0

I made up a flip chart to go with it.  My Snr Primary LOVES the song, and I’m sure it’s one we can sing as long as I am Primary Music Leader

Here is my flip chart: When I do whats right I feel good flipchart pdf

Flip chart for Our Primary Colours

I came across the first page of a flip chart I liked on Sugardoodle, but unfortunately my virus protection software wouldn’t open it because it detected a virus.

So I made my own flip chart.

It does have the Australian way of spelling ‘colour’.

My family was asked recently to do this hymn on Fast Sunday as a musical item.

Actually, my entire family was asked to sing it but I have a teenage son who ‘doesn’t sing’ (he’d rather feign sickness than sing a musical item and I prefer he came to church with us), I have a toddler who will sing at the top of her lungs if she’s supposed to be quiet, but she would scream through something like this.  And a husband and teenage daughter who adore singing.

I can sing, but who would practice the accompaniment with us at 11pm when my husband is available?  So my husband and daughter were volunteered as tribute, and I spent three weeks trying to get this arrangement together, which is quite a long time for me because…toddler!

It’s for Alto (my daughter is a Soprano, but managed this just fine first thing Sunday morning), and Tenor.

Here’s the pdf: In Fasting We Approach Thee

I have one child in Primary who loves to torment me (why is there always one?).  Anyways, he said “Why don’t you teach us actual music?”  So I thought “Okay, I will”.  So I quickly made up these Dynamics and Italian Terms cards to use whenever I want to revise a song with the children. I did do them quickly, and added to them as I went so they’re not consistent.  Here are the secrets:-

The Italian Terms cards are easier.  They’re on the same page.

Cut each little half page out, match it up and laminate.  I stuck a giant paddle pop stick onto one side of a page with sticky tape.  Then I stuck the matching side on with more tape.  Simple but effective.

If I were to print them out again, I would do all the Italian Term cards one colour, and all the Dynamics cards a different colour, but I’m not going to waste paper at this point.  Besides, it keeps the children on their toes

Just to avoid confusion, here are what the fronts and backs of each card is supposed to say:-

The children absolutely love these, especially Snr Primary.  I generally use two at a time for each verse of a song I want to revise.  I might throw in an extra ‘surprise’ in a verse.  Use Sfz sparingly.

Here are the pdf’s of the cards:

Aim: To capture each Presentation Pokemon

1. Choose one player (can be a child or a teacher). Player walks to the Pokestop sign (I stuck mine up the back of the room on the wall). There will be two piles of cards underneath the Pokestop sign (I put the cards on a chair.  A small table works great too). Turn over a card in one pile to see how many poke balls they can throw. Turn over another card to see which Pokemon character and Presentation song is to be targeted with the poke balls/beanbags and sung at the same time by everyone.  They need to show you the cards, so you can warn the pianist which song they need to play next.

2. Have the larger card Pokemon characters lined up somewhere else in the room. (I had mine out the front). The player has to throw the assigned number of poke balls/bags and see if they can land on the character of the card they turned over at the Pokestop while the rest of Primary sing the Presentation song that goes with that character. If the child/teacher can’t hit it with the assigned number of poke balls, have them hand the pokebag to someone who hasn’t had a turn. Continue until the Pokemon is ‘caught’.

3. Once the Pokemon is ‘captured’, finish singing that song, and choose another child/teacher to start over again until all the Presentation Pokemons are caught.

You also need to make or purchase some Poke ball bean bags (or something that will land on the larger Pokemon character pictures.

How to set up:

1. Cut out a Primary Presentation song strip and stick it under a larger Pokemon Character. You can choose which song strip goes with which character. Continue until all your songs are assigned.
2. Cut out cards and backs. I usually paste the front of the cards on to the backs lightly before laminating. I am computer challenged, so I can’t guarantee the fronts will match up with the backs if you try and print double sided. I wouldn’t recommend it. The idea is so that the front of the cards aren’t see through.
3. Wonder how on earth to get Pokeball bean bags. Use any bean bags if you’re stuck. Or Hacky Sacks. Whatever will land on the Pokemon characters.  I hand sewed my own.

Variations: The teacher turns over the cards, and has some children help throw the pokeball bean bags.

I played this last week as my last revision before our Presentation Practices, and it was a huge success.  It had the full approval of my Primary Presidency, and EVERY single child was involved, including those who usually do not like to participate.  WOW!

The children in my primary didn’t want to sing as someone was throwing the pokebags, so we waited until the Pokémon had a pokebag on it, then we sang the song.  We had one child with special needs (who usually won’t leave their chair) come and acted as a ‘catcher’ each time a pokebag was thrown and missed, and return them to me.  Another returned the ‘caught’ Pokémon pictures to me.  It was a great way to get children with ASD involved!

The children did sing the songs beautifully though.  I thought they’d by hyper, but they weren’t.  They were very much engaged the entire time.

Here’s a cute little number.  ‘Jesus Said Love Everyone’ in D Major for violin and piano.

Search, Ponder and Pray arrangement for Solo Voice with Violin and Piano

A few months ago when I was thinking of the songs I wanted my Primary to sing for the Presentation this year, I had 12 songs that I definitely wanted them to do that tied in with the monthly themes.  However, I also wanted to do Search, Ponder and Pray – because to me, that sums up the yearly theme nicely.

To cut a long story short, and with my beautiful Primary President giving me complete freedom to whatever I feel is best for our Primary, I thought a solo would be perfect for this song.

I heard one version on You Tube that I loved, but there wasn’t any sheet music (I only listened to it once, that’s all I had time to do).  So with that version as my inspiration, I wrote my own arrangement.

We performed it this week at Leadership training, and we received many positive comments and requests for the music.